Has a Diamond Always Been Forever? - Oval + Pear

Has a Diamond Always Been Forever?

Engagement rings have existed in many forms since as early as the Roman era. In that time betrothal rings were just bands made of iron or gold. Later the started to set precious stones into the band as a sign of wealth but they weren’t specifically designed for the purpose of an engagement ring. Even signet rings, which were very popular during this time, sometimes performed the function of a betrothal ring.

As the times changed and fashions came and went gem set rings, in a display of wealth, started to become more and more popular and were commonly given as a part of the betrothal/marriage contract. They also used gems protect them from certain ailments or negatives spirits with each stone being used for a different purpose.

These days engagement rings are so often diamond but this wasn’t always the case and the first diamond betrothal/engagement ring wasn’t given until the 15th Century. Holy Roman Emperor Maximillian gave his betrothed, Mary of Burgundy, a diamond ring in 1477 and this is the first recorded diamond engagement ring. However, it did not start a craze which had everyone following but instead was a slow burn that took centuries for diamond rings to gain the status they have now.

During the centuries up until the late 19th/early 20th century several different gemstones were a popular choice for engagement rings. Queen Victoria herself had a snake head design ring with rubies, diamond and an emerald set into it. Then came the discovery of diamonds in South Africa and the game changed.

De Beers pioneered one of the most successful marketing campaigns ever and the demand for diamonds as engagement rings started to soar in western countries. From the start of the 20th century diamonds continued to become the predominant choice of stone to propose with. In 1948 the marketing slogan of “A Diamond Is Forever” was launched by De Beers and diamonds become the first choice when it came to selecting a ring for your forever love. In a display of the power and success of this slogan it is still used by the company today!

While diamonds have dominated the engagement ring scene for most of modern times the actual history of the use of them for engagement rings is relatively new. These days many different stones have regained popularity. Sapphires in particular are extremely popular at the moment and their durability and unique colours makes them an excellent option for a one of a kind engagement ring. 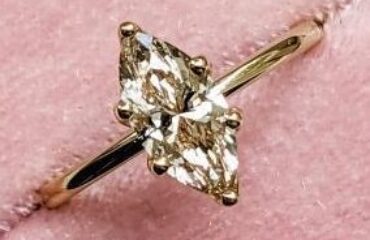 All By Myself – The History of Solitaire Rings

The Band’s All Here – A History of Wedding Bands 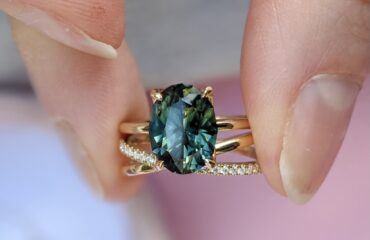